It's a Cinch Cardigan Clip. 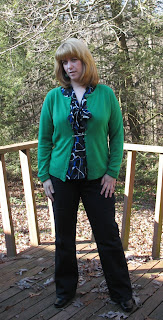 I wouldn't normally put the green cardigan (NY&Co) with the blue, black & ivory printed blouse (Kohls)...but for some reason it just works -- perhaps because the blue in the blouse & green of the cardi are the same color value and the black background in the top blends with the very dark wash of the Ralph Lauren jean. The black boots are from Target, the barely visible diamond & saphire pinky ring was a gift (from DH) and I'm also wearing blue & green earrings from a dollar store that sort of subtly help tie the whole color scheme of the outfit together.

The other thing I'm wearing is my brand new homemade cardigan clip!
Kasmira of the wonderful blog, What I wore today, wrote about what a sweater clip is and then made one from clip-on earrings. I immediately thought about using one in a different way -- to sort of cinch in a boxier cardigan at the waist while still allowing for it to remain open enough to show the blouse underneath, thus creating a very pleasing shape & line. You can get the same effect by buttoning the cardigan as I've blogged about before, but sometimes the buttons look like they are pulling -- even if the cardi fits properly. That doesn't look flattering, IMO. But this method of wearing a cardigan clip solves that problem nicely, don't you think?
I purposely wanted the clip to be unnassuming so it wouldn't detract from any jewelery or other accessories I might wear, but of course you could create a beautiful masterpiece that was worthy of being the centerpiece of an outfit in its own right, if you wanted :)
Here's how I interpreted what Kasmira did but with my own personal tweak -- so simple it's almost ridiculous to describe it, lol! From a craft store I purchased a short length of chain usually used for making braclets, along with some clip on earring backs used for making your own earrings. You will also need some sort of needle nose plier, and maybe some wire cutters. I trimmed the chain length in about half because I wanted to keep it short enough to create the cinching effect on a sweater. But if you were making a more traditional sweater clip like Kasmira did you wouldn't even need to trim the chain at all. The clip on earring backs have an open loop for attaching things to -- simply slip an end of chain into the opening and bend the loop closed with the pliers. That's it! I plan to make several more in varying degrees of length & fanciness -- I'm hooked! (ok, really bad pun, sorry, lol)
Posted by Kayleigh

Great idea with the sweater clip!

Thanks v! It was soooo easy, really :)

Another great outfit. I love the color and the sweater clip is a great idea. :O)

Yes, those colors together definitely work! Lovely outfit. And that's a good idea for the sweater clip, as well! Thanks for the how-to. :)

Thanks so much Erica -- and listen, it was sooo easy to do my version of Kasmira's clip that it was barely much of a "how-to", lol, but you are VERY welcome :)