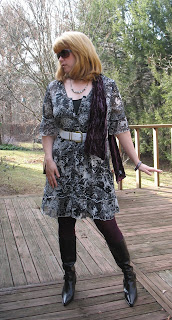 The lovely Sheila from Ephemera once pegged me as a rock & roll chick -- and she was more right than she realized. I actually used to be a singer. I've been in bands that spanned musical styles & eras from punk to blues, from southern rock to hard rock and a few more in between. My last band was nearly 20 years ago, but if you ask me nicely I'll still break out into my rendition of Janis Joplin's Bobby McGee (ok, you don't even have to ask me that nicely, lol)

So, when I read that Jane of the wonderful blog WorkThatWardrobe had issued a musical challenge one of the first things that popped into my head was this dress, because it actually inspired a song the

minute I put it on.

I bought the dress from Target without even trying it on -- not typical of me. It just caught my eye as I was on my way to check out and I quickly grabbed it off the rack and bought it with the rest of my loot. In retrospect I think maybe it was because this dress is something I would have worn 20 years ago for a gig so it spoke to me. In any case, I wondered if this type of frock would look silly on me now, if it were too young for me.

When I got home, put it on and looked in the mirror I immediately heard that song, "Rock & Roll Never Forgets" complete with Bob Seger's raspy voice enticing me to, "Come back baby..." Of course at 45 this sweet sixteen is closer to 41 than 31, but it does have me wondering if I could still hold my own while sitting in on a few tunes with the house band down at the local bar. The fact that I'm likely old enough to be the lead guitarist's mother doesn't need to be discussed ;)
"Busted flat in Baton Rouge, headin for a train..."

So thus the torch song trilogy of 1, 2, and now 3 outfits inspired by a song has come to an end -- see you tomorrow :)
Posted by Kayleigh

You look fabulous!!! and we have even more in common that before I also used to sing in a band and am often found hogging the karaoke!!!

You are a rock star in this look! All that is missing is your entourage.

Whoohoo! You look like a red hot momma! Great outfit.

I am so glad you were inspired by the challenge and you look great today. Definitely Rock Chic!

Hot mamma!! I love your pics for this, so fun. Totally cool dress. So awesome you're a singer, sounds like you'd have a lot of cool stories!!

Hands down, best of the 3! I love this dress on you - you are NOT too old to wear this!

Everything about this outfit works: the boots, the dress, the belt, the cami, the accessories. You could pop some colour in there for a twist - yellow, red, hot pink?

Thanks for the mention! You should sing again!

I love these pics! You look like you are having so much fun with this!

Go ahead Rockstar!
You look positively fabulous. And i love all 3 poses! you looked like you were having loads of fun during your photo shoot too.

Wow!!! Thank you SOOO much everyone :D

Spiragirl -- that is wild, we really do have alot in common! One of us needs to jump across the pond so we can hang out :)

La Belette -- my entourage, that is sooo funny, lol!

notSupermum -- thank you! I admit I kinda felt a little like a red hot momma ;)

Jane -- I have to say you are so clever comming up with these challenges and I can't wait to see what you have up your sleeve next!

Trace -- You know, I'm glad for all the experiences, but I'm happier with a more settled life than what I would have had if I'd continued trying to make singing my life. Still, the stories I could tell indeed!

Sheila -- thank you! I felt like I might be able to pull this off...and this was my fave one too :) The cami is actually the slip that is attached to the dress (it's a little sheer) but now that you said that I bet I could find slips in other colors and swap them out -- great idea!

Hillary -- I really DID have fun, it was good for the soul to play dress-up like this :)

Kristen -- Thanks you so much!

Lady D -- it's so funny you called it a "photo shoot"...that's exactly what it felt like! I had a blast, gotta say.